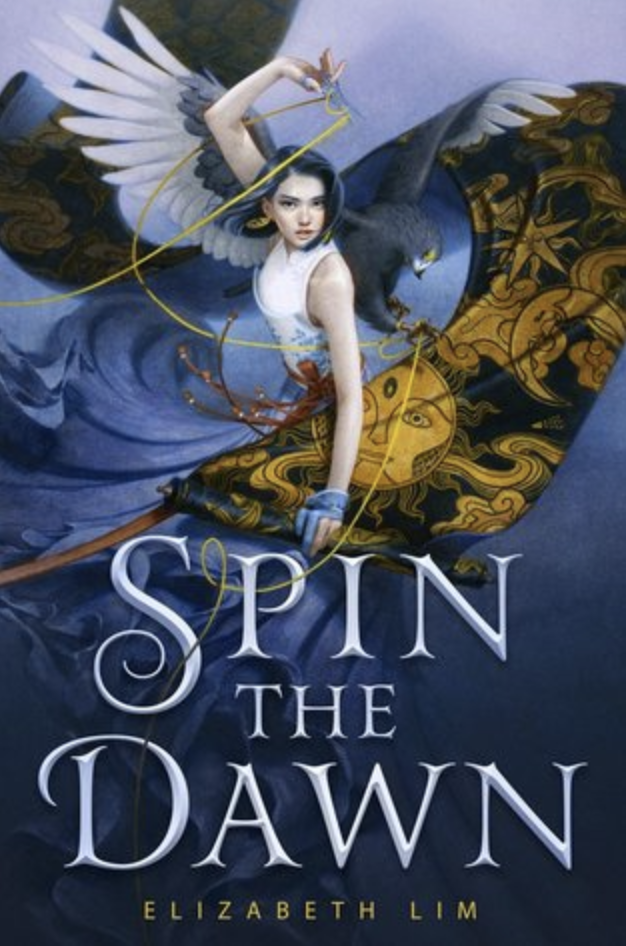 Summary: Project Runway meets Mulan in this sweeping YA fantasy about a young girl who poses as a boy to compete for the role of imperial tailor and embarks on an impossible journey to sew three magic dresses, from the sun, the moon, and the stars.

Steeped in Chinese culture, sizzling with forbidden romance, and shimmering with magic, this young adult fantasy is pitch-perfect for fans of Sarah J. Maas or Renée Ahdieh.

I haven’t seen Project Runway, but I am always here for Mulan retellings/mashups/inspired-bys, and Spin the Dawn is a lot of fun in that regard. Our heroine, Maia, has been the person holding her family together after her mother’s death. Her two oldest brothers died in war, and the third was left seriously wounded, which means when the imperial summons arrives, the only option is her father. And since her father really isn’t an option, Maia disguises herself as her wounded brother and heads for the palace in her father’s place.

While there’s definitely a measure of wanting to protect her family (her father’s condition, winning would pull her family out of poverty), Maia’s other main motivation for taking on her brother’s identity is to prove herself. She is a fantastic tailor who has been held back by society, and she believes she has the skills to win the post for the best tailor in the land. Even if the safest thing would be to fail the contest immediately and return home, Maia puts everything she has on the line. She’s unprepared for the politics and the sabotage and the backstabbing (and the magic!), but she forges ahead anyway, and that determination serves her well throughout the rest of the book.

Because once the contest is over, the real trial begins: making three legendary dresses with impossible materials. While the first half of the book was Project Runway, the second half of the book is a quest/adventure story with Maia and Edan. The trials to obtain the laughter of the sun, the tears of the moon, and the blood of stars were imaginative, appropriately difficult, and entertaining set pieces, but what I appreciated most about the quest was the opportunity to develop Edan from a mercurial ally to a love interest I was happy for Maia to pursue and be pursued by. Their relationship carries the second half of the book—and sets up the high stakes for the sequel, which I am definitely interested in reading.

Recommendation: Get it soon. Spin the Dawn has an engaging heroine, and fun romance, and high-stakes politics, fashion contests, and dangerous quests. Maia’s story is an entertaining one, and I’m looking forward to seeing what happens to her and her love interest in the next book.

Writer Wednesday: Author Interview with Elizabeth Lim on Spin the Dawn at Vicky Who Reads

One Reply to “Review: Spin the Dawn”