Everyone, please welcome Ismée Williams to Rich in Color! Ismée’s book, THIS TRAIN IS BEING HELD, is out on February 11th. We are every excited to have Ismée here to talk about it: 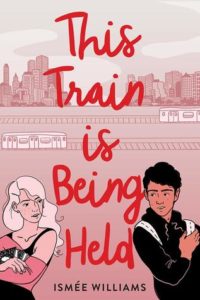 When private school student Isabelle Warren first meets Dominican-American Alex Rosario on the downtown 1 train, she remembers his green eyes and his gentlemanly behavior. He remembers her untroubled happiness, something he feels all rich kids must possess. That, and her long dancer legs. Over the course of multiple subway encounters spanning the next three years, Isabelle learns of Alex’s struggle with his father, who is hell-bent on Alex being a contender for the major leagues, despite Alex’s desire to go to college and become a poet. Alex learns about Isabelle’s unstable mother, a woman with a prejudice against Latino men. But fate—and the 1 train—throw them together when Isabelle needs Alex most. Heartfelt and evocative, this romantic drama will appeal to readers of Jenny Han and Sarah Dessen.

THIS TRAIN IS BEING HELD has been likened to a modern-day retelling of West Side Story. The secret is, I didn’t start out with that intention. My inspiration for THIS TRAIN IS BEING HELD was the jungle that is the great city of New York, how individuals from opposite extremes of life can pass each other on the street or be smushed together in a crowded subway. I loved the idea of putting two teens together in a train car who otherwise wouldn’t cross paths and exploring what would happen. I thought of what they would look like, what they would have in common and what would differ between them. That ended up being a girl, Isa, who’s privileged in the traditional sense, blessed with money, beauty, and talent, and a boy, Alex, who’s less so, because of who his parents are and where they were born. Alex has his own privileges, to be sure–his own beauty, his own talent, and the love and support of his mom and step-mom. But one of his wounds is that strangers make assumptions about him because of what he looks like–a massively tall, very fit, brown-skinned boy. He is definitely the ‘Maria’ character in the West Side Story trope.

THIS TRAIN IS BEING HELD shares West Side Story’s message of tolerance. I read somewhere that the creators of the famous musical, composer Leonard Berstein, idea-man and choreographer Jerome Robbins, book writer Arther Laurents and lyricist Stephen Sondheim, originally intended for the conflict to be between rival Catholic and Jewish gangs on the East Side. In August of 1955 the Los Angeles times ran an article, “Six Jailed in Fight Death”, detailing how the leader of a Latino gang had been killed in a fight outside a teen dance hall. After reading this, writer Laurents suggested changing the gangs in the musical to white and Puerto Rican. That’s when interest and funding took off. It’s interesting to consider the show could have been East Side Story! I didn’t see the original Broadway musical, of course (I wasn’t born yet!) but I do remember watching the movie and the conflicting emotions it made me feel. I loved the power of the romance, the idea that love could rise above existing prejudices. As a dancer, I was drawn to the choreography and the music, especially the scenes that celebrated Latinx experience. My abuela was too. I can still hear her high heels clicking against the terra cotta tiles of our kitchen floor as she merengued to the music. But the movie also crystalized for me that society viewed being Latinx as undesireable. I saw the film over twenty years after it had won ten Academy Awards, including Best Picture, so I consider it to be terribly outdated. As the child of a Cuban immigrant and a white protestant from New Jersey, I was biased into believing things had changed and that it was easier for my parents than it was for Tony and Maria. I was naive, of course. Couples like Isa and Alex still face challenges, which is something I wanted to explore in THIS TRAIN. But I really wanted to show that love is love and that it is powerful. It might be inconvenient to fall for someone people don’t expect you to be with, but it should never be wrong.

Like West Side Story, THIS TRAIN IS BEING HELD revolves around the star-crossed lovers. I intended to show not just Alex and Isa’s attraction, but also their connection which arises from what they share: their passions for dance and baseball and poetry, their love and dedication to their families, and how they both try very, very hard to live up to the expectations of those around them. But I wanted to highlight their attraction, that insistent tug that pulls them together and makes it difficult for them to put the other out of their mind. I hope the reader feels the same draw to the characters and their plight that I felt when I watched West Side Story. For that to happen, there has to be more than just attraction. We need to see the tension, that thing that tears the lovers apart. Just like in West Side Story, there are many external factors that threaten the lovers. Isa’s mother, even though she’s Cuban, doesn’t want her daughter to date a Latino because she grew up with a cheating father. Alex’s friends think he should date a Dominican girl from the Heights, not a blondie from the Upper East Side. One even considers him a traitor. Another friend of Alex’s gets drawn into a Dominican gang, which provides even more parallels to West Side Story. There are internal factors that work against the lovers as well, though here the plot is more Shakespeare than West Side Story, with tragic misunderstandings that stem from not being fully honest with one another. And of course, fate plays its own role. There is another big difference between THIS TRAIN IS BEING HELD and West Side Story but I cannot share it without spoiling too much!

I read that the music of the famous America dance scene, sung by EGOT-winning Rita Moreno, doesn’t have roots in Puerto Rico. The rhythms are those of a haupango, a folk dance from Mexico.  Just as West Side Story hold up the ideal of the US as a big melting pot and incorporated different elements of Latin rhythms, THIS TRAIN IS BEING HELD looks at New York as a place where everyone can belong and explores the spectrum of Latinx identity and Latinx families. I hope readers enjoy the ride!

Ismée Williams is a pediatric cardiologist by day and an accomplished author by night. Her first book with Abrams, Water in May, was released in 2017 to critical acclaim. She lives in New York City.