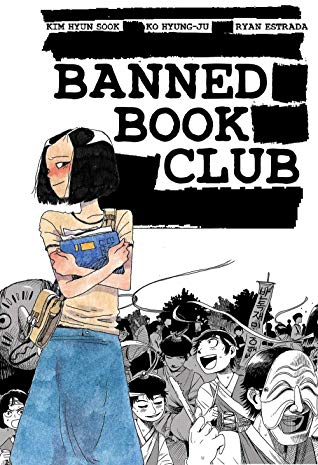 Summary: When Kim Hyun Sook started college in 1983 she was ready for her world to open up. After acing her exams and sort-of convincing her traditional mother that it was a good idea for a woman to go to college, she looked forward to soaking up the ideas of Western Literature far from the drudgery she was promised at her family’s restaurant. But literature class would prove to be just the start of a massive turning point, still focused on reading but with life-or-death stakes she never could have imagined.

Review: As long as there have been books, there have been people trying to control them. In this graphic novel memoir, we’re able to see this in play during the 80s in South Korea. College students continued to read banned materials even when the consequences for being caught were quite grim.

The story opens with a family argument. Hyun Sook’s mother does not understand why the college students, and her daughter specifically, feel that things need to be different. She characterizes protesting as complaining. The public in general has accepted that things are as they are and while not content, they are willing to keep the status quo in return for peace. Initially Hyun Sook really does seem to want to be at college to learn and has no interest in activism, resistance, or protest. She is alarmed by the defiance her peers are showing, but that soon changes.

This is a timely book with activism and dissent as a central theme. Young people take learning into their own hands. When a government entity is telling you not to read something, it begs the questions, why? What does the government have to fear? And if they fear these books and words, they must be powerful.

Hyun Sook’s story is compelling and hard to look away from so it reads really quickly. This would be an excellent book to pair with the 2017 movie A Taxi Driver which features the Gwangju incident mentioned in this story. I had recently watched the movie and it helped to have that context since Korean history is not taught very thoroughly (meaning not at all) in U.S. schools. For readers unfamiliar with this time in South Korea’s history, some of the details may be a little confusing, but even then, readers will still be able to follow the storyline.

Recommendation: Banned Book Club has appeal for many, many readers. As a graphic novel memoir dealing with activism it’s sure to intrigue many. As a book celebrating the revolutionary act of reading, I’m guessing many book lovers will want to dive in. History fans will likely want to grab it too. And of course, those who keep asking for college aged characters may find this one to their liking. Get it soon!