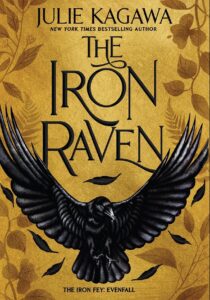 Summary: You may have heard of me…

With the Iron Queen Meghan Chase and her prince consort, Puck’s longtime rival Ash, and allies old and new by his side, Puck begins a fantastical and dangerous adventure not to be missed or forgotten.

Review: I loved Julie Kagawa’s The Shadow of the Fox series, so I jumped on the chance to read another of her books. THE IRON RAVEN was my introduction to the Iron Fey world, and even though it is apparently installment #8 in the series, it’s a solid entry point for new readers. Kagawa is careful to give enough backstory that a new reader can understand the basics of the world and the relationships without being lost, and the few flashbacks we did get were helpful in building the contrast between the past Puck and the current Puck.

A lot of your enjoyment of the book is going to hinge on whether or not you like Puck as a narrator. Personally, I was fond of Puck’s brand of snark, so his sarcastic humor and occasional foray into viciousness only added to my enjoyment rather than detracted from it. I liked his sharp banter and the dark moments where he revealed just how cruel he used to be—and still could be.

One of my favorite parts of any fantasy series is watching an author have fun with the world they’ve created, and the different realms that Puck and his companions passed through were all memorable and, like the many creatures and people inhabiting the Nevernever, often dangerous. As for danger, it can be difficult to write tricksters in battle, but Kagawa did a great job of showcasing Puck’s creativity and power whenever an action scene came up. I’d love to see some of these fights animated, honestly.

As a new reader to the series, I found the characterization outside of Puck a little on the shallow side; I’m certain long-time readers of the series gleaned a lot more depth in the character interactions than I did. We got a few references to more emotional moments regarding Puck and Ash’s rivalry or the past love triangle between them and Megan, which was helpful and gave context to some of Puck’s behavior and thoughts in the second half of the book. As it was, the characters were serviceable, and I had enough information to figure out what I needed to.

I do wish we had more time devoted to Nyx—I rather liked what we got of her and craved more. Her burgeoning romance with Puck had an interesting foundation, but it was difficult to get to know her at times. Then again, a big part of her character is the loss of her memories as a Forgotten and her tenuous connection to existence. I do hope that she will get more screen time (and more time with just Puck) in the rest of the series now that we have a lot of the getting-readers-back-up-to-speed out of the way.

Recommendation: Get it soon if you are a fan of the series or are looking for a faery adventure story. Puck is an entertaining, snarky narrator, and his adventure through the faery realm is filled with memorable locations and exciting fights. THE IRON RAVEN is a pretty good starting point for new readers, and I’m curious enough about where the plot is headed that I’ll keep my eye out for the next book.