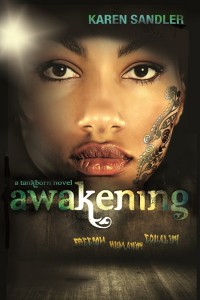 Say hello to Karen Sandler, author of the Tankborn trilogy from Tu Books! The second installment, AWAKENING, hit shelves this spring. Karen has graciously agreed to write a guest post for us today–we hope you enjoy it as much as we did!

I want to preface this post by acknowledging that writers have a right to write anything they want to write. It’s not as if there are any quota systems in place in fiction, where 6.2% of the characters have to be of this ethnicity, or 8.9% of that gender identity. You’re free to create any kind of character, culture, and world that you like.

That said, I’d like to consider some conscious and not-so-conscious reasons why science fiction might be less diverse than it could be. Why if there are diverse characters, they are nearly always the secondary characters and not the main characters.

So what do I mean by diverse main characters in science fiction? I mean characters that are:

You wouldn’t need all these qualities in a single character (although it could be done), but by my definition, your character would need at least one to be considered diverse. And this is my definition, yours might vary. Feel free to quibble with me in the comments about these categories, or to add other areas of diversity, but these give us a starting point.

In my points below, I’m using the word “white” as a shorthand for Caucasian of European extraction, a WASP, if you will. I chose white as a shorthand because in the vast majority of science fiction, that’s the ethnicity of the main characters (and more often than not, male). But I hope you’ll extrapolate this shorthand into other areas of diversity, that is, if you’re straight, writing a GLBTQ character might be a stretch for you.

On to the Wrong-Headed Reasons:

1) I’m white, and it might be offensive it I write about other cultures/ethnicities.

If you follow this logic down the rabbit hole, you might come to the conclusion that only white people can write white people, only woman can write women characters, only children can write about children, ad infinitum, ad nauseum. Which of course is nuts. We have to imagine characters that are outside ourselves all the time. Do you think Jeff Lindsay (DEXTER), is a serial killer? Or that Carrie Ryan (FOREST OF HANDS AND TEETH) is secretly a zombie? Or that either one of them worries about offending serial killers or zombies by writing about them in their books? Not likely.

However, it is possible to write a diverse character in such a way that is offensive. That can happen when we rely only on the stereotypes about others that float around in our brains, rather than gaining an understanding of that different ethnicity/culture and making the character a real person.

The key is respect—having respect for the culture, the ethnicity, the gender, gender identification, physical abilities. If you start with respect, you should do fine representing diverse characters.

2) Everyone says you’re supposed to write what you know, and I don’t really know anything about other cultures/ethnicities.

Um, see #1, particularly the part about serial killers and zombies.

We have two ways of solving the I Don’t Know problem. First, just as we would if we wanted to include a scene featuring a hot air balloon in our novel, we do some research. Read books, find reliable sites on the Internet, talk to people who have done ballooning. We don’t throw up our hands and say, “Can’t write about hot air ballooning, because you have to write what you know.”

If you want to follow that edict (write what you know), then you’d better know more. Learn more. Read about the Roma, the Indian caste system, the Hindu religion (as I did for TANKBORN). If you were writing an SF book that involved cloning, you’d go learn as much as you could about cloning.

The second way of solving the I Don’t Know problem, once you’ve educated yourself, is to put yourself in your characters’ shoes. Imagine what it would be like as them. This is what fiction is all about.

3) The world I’ve built only includes white people. Everyone else was killed in a plague.

Oh, puleeze! This is just a lazy excuse. It reminds me of my biggest complaint about Larry Niven’s THE MOTE IN GOD’S EYE. In his future world, something catastrophic has happened with the human birthrate. So women are coddled and cosseted (because they’re the baby-makers), and as a consequence have almost zero influence on the story’s action. To me, that seemed like a clever way to keep women out of the story. Maybe this wasn’t Niven’s intent, but it kind of soured me on the series.

In any case, creating an imaginary plague that only spares white people is pretty preposterous. There’s no biological difference between races. There might be higher incidences of genetic weaknesses based on ethnicity (the Tay-Sachs genetic disorder that disproportionately impacts Eastern European Ashkenazi Jews comes to mind), but to create a future in which, say, everyone with dark skin is wiped out, is bad world-building.

4) I just don’t see how non-white characters would fit into my book. All the characters in my head are white.

I see this excuse as a crisis of imagination. Particularly if you’re writing SF, often set in a future when anything can change. When everything can be different than it is now. We’ve already seen our first black president. We’ve seen women in ever more powerful roles. Gays and lesbians are coming out in nearly every corner of society, and universal marriage equality is becoming more and more imaginable.

You can’t imagine a black genetic engineer as your main character? An Hispanic lesbian piloting a starship? Then your imagination needs some revamping. You need to start thinking outside the box. Open up your corner of the world to more possibilities.

5) If my main characters are non-white, a publisher (or reader) won’t buy my book.

They bought Justine Larbalestier’s LIAR (although there was the whole #racefail issue with the original cover). Sherman Alexie’s THE ABSOLUTELY TRUE DIARY OF A PART-TIME INDIAN. Malinda Lo’s HUNTRESS. It’s true that there are few enough diverse main characters that we’re still writing blog posts like this one or the one here. But if it’s a wonderful book, publishers will buy it.

And as for readers, this is a bit of a self-fulfilling prophecy. We don’t want to write diverse characters because we’re afraid readers won’t buy them. But readers can’t buy what hasn’t been written. If your story with diverse main characters is wonderful, readers will seek it out. 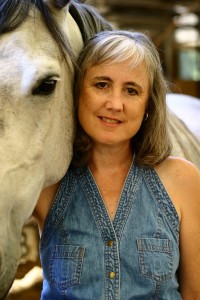