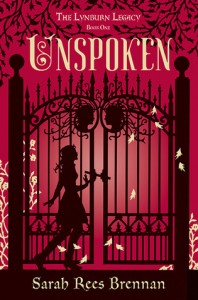 Summary: Kami Glass loves someone she’s never met . . . a boy she’s talked to in her head ever since she was born. She wasn’t silent about her imaginary friend during her childhood, and is thus a bit of an outsider in her sleepy English town of Sorry-in-the-Vale. Still, Kami hasn’t suffered too much from not fitting in. She has a best friend, runs the school newspaper, and is only occasionally caught talking to herself. Her life is in order, just the way she likes it, despite the voice in her head.

But all that changes when the Lynburns return.

The Lynburn family has owned the spectacular and sinister manor that overlooks Sorry-in-the-Vale for centuries. The mysterious twin sisters who abandoned their ancestral home a generation ago are back, along with their teenage sons, Jared and Ash, one of whom is eerily familiar to Kami. Kami is not one to shy away from the unknown—in fact, she’s determined to find answers for all the questions Sorry-in-the-Vale is suddenly posing. Who is responsible for the bloody deeds in the depths of the woods? What is her own mother hiding? And now that her imaginary friend has become a real boy, does she still love him? Does she hate him? Can she trust him? —(Summary and image via Goodreads)

Review: Rees Brennan lets her love for gothic romances and lady sleuths shine through in Unspoken, and I heartily approve of the combination. Kami and her friends are a delight (particularly Angela), and I enjoyed their antics as they tried to uncover the mysteries around the Lynburn family. Most of the teenage characters in the book were a lot of fun, but I’ll be the first to admit that I cared very little for the adults.

The humor in Unspoken left me with mixed feelings. Rees Brennan’s characters have a lot of witty banter, but the humor didn’t often strike a chord with me. (I felt much the same about her Demon’s Lexicon series, which is a shame, as I really enjoy the author’s tumblr.) The ending was not very satisfying for me for several spoiler-y reasons, but I truly enjoyed the last-minute emotional sucker-punching that has had most of Rees Brennan’s fans in a tizzy since the book came out.

Recommendation: Get it soon, if gothics and mind-reading romances are your thing. If not, borrow it someday, because the Lynburn Legacy trilogy has a lot of promise. I have high hopes for the second book, which comes out later this year.