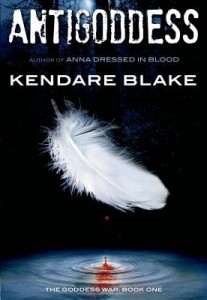 It’s not very often that an author makes a bold move in a novel, especially the first novel of a series, that shocks the reader and has them thinking “Did Kendare Blake really just do that?” I’m not going to give it away, you have to read the novel to discover yourself, but Blake makes a shocking decision about one of her characters in her new series about ancient Greek Gods & Goddess fighting for survival, that leaves the reader with the knowledge that her series will be dark and brutal and one fantastic read.

Just like another popular YA series that deals with the Greek Gods, Blake does a fine job of weaving history and mythology into the current events of the story. Blake’s gods and goddess haven’t gone away, they’ve been living among us ever since the fall of the Greek empire and are now starting to die, thus bringing about a new war. The difference here, in Antigoddess, is that the story doesn’t just involved the stories of gods, but also of the humans that interacted with them. The humans the gods interacted with and loved are now reincarnated though they do not remember their previous lives. I frankly loved that twist to the story, especially as other human characters were identified and their 2013 selves are very different from their ancient selves. Athena and Hermes, both sarcastic gods who read like ancient teenagers that possess a wisdom of the ages, go in search of Cassandra who was an oracle during the era of the Trojan War. The two gods come across Odysseus, who is now a cheeky teenage Brit, as well as Hector and Andromache, who for now remain their 2013 selves. I have a feeling that will change however, because the book, and by extension the series, is unpredictable.

And gory, and scary and often times doesn’t feel like a YA novel because Blake does not play it safe. The novel is full of gritty violence, after all, it is a beginning of a war with “immortal beings” who see the earth as their playground, just as they did eons ago. The old Greek myths are much old stories that since we are so removed from them, we don’t often think about the catastrophes the real people of the time experienced to create the mythological stories. By being set in modern day, Antigoddess reminds the reader of the regular people, the collateral damage, of the god’s playground. It’s a sobering thought and makes it hard for the reader to root for Athena’s survival when the lives of humans are at risk. Yet, Blake breathes such life into all the characters, both human and god, that when Cassandra and Athena finally come together and begin to fight, you know they will be an unstoppable team; they just have to learn to trust each other first. And that journey will be worth the read.

I enjoyed Antigoddess as it moved at a fairly smooth pace, switching between Athena’s voice and Cassandra’s voice. The plot slowly builds and there are crossovers between the two stories that has the reader guessing at the links and figuring it all out before Athena does, and eventually Cassandra. As I said earlier, Blake weaves in historical stories well, and those bits do not slow down the action one bit. In fact, the historical information given actually adds to the tension (at least it did for me). Blake created a world that I truly believable and scary, and I can’t wait to read what happens next. If you’re looking for a new series, now that many are ending, this is a good place to start.