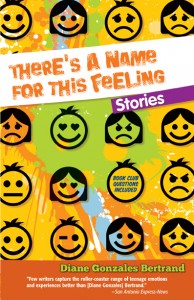 Summary: In the title story, Lucinda hatches a clever plan to get her boyfriend back and is crushed when she ultimately realizes that it’s impossible to force a guy to love you. Like all young people, she ignores the advice of her mom and learns that lesson—and many more—the hard way.

In this bilingual collection of ten short stories for young people, kids deal with both serious and humorous consequences after they ignore their parents’ suggestions and disobey rules. At a friend’s house on New Year’s Eve, Raymond plays with fireworks even though he promised his parents he wouldn’t. Kids on a track team search for a mysterious naked woman with embarrassing results. And two girls in a wax museum are in for a surprise when they ignore the signs about touching the figures.

These short and accessible contemporary stories are alternately amusing and poignant as they explore issues relevant to today’s youth. Teens deal with everything from grandparents suffering from dementia to difficult customers at a first job. And in one story, a young girl grieves the loss of her baby, a miscarriage her mom calls a “blessing.” These stories highlight the emotional tailspins of living in a complicated world.

Review: There’s a Name For This Feeling: Stories is aimed at the younger end of the YA spectrum, but this collection of ten short stories makes up for its slim page count with some hard-hitting vignettes. Each of the stories is tightly focused on a different character, and while some stories share similar elements (there are two stories involving grandmothers who have dementia, for example), the approach to each is unique.

Diane Gonzales Bertrand excels at showcasing a broad range of emotions in these short stories, and they come together to form a mostly compelling, slice-of-life exploration of Latin@ teenagers. The stories are a good mix of serious and funny and touching (and sometimes a bit of all of those).

My favorite of the short stories was “My Twisted Tongue,” mostly because it got me right in the heart. My father is Latino, and my mother is white, and neither I nor the rest of my siblings speak Spanish. I learned Spanish in school (the last class I had was over four years ago), and I’ve always panicked a little whenever someone tried to speak to me in Spanish, was surprised at my skill in English, or questioned why I didn’t speak Spanish. Ninfa’s dilemma and the conversation she had with her dad made me want to wrap her up in a fuzzy blanket until she felt better. Other standouts include “Crooked Stitches” and “A Small Red Box.”

While the collection is a pretty solid one, I wasn’t enamored with all of the stories. Neither “Agapito” nor “The Naked Woman on Poplar Street” were interesting to me, and I disliked the framing device in “Trajectory.” These stories only distract a little from the rest of the collection, but I do wish I had been able to enthusiastically endorse all of them.

Teachers may also be interested to know that the book also includes discussion questions (Ideas for Conversation) and writing prompts (Ideas for Writing). All of the stories, along with the discussion and writing prompts, are translated into Spanish. This collection would be an especially great addition to classrooms with Spanish-speaking students.

Recommendation: Get it soon, if you’re a teacher looking to expand your short story curriculum—otherwise, borrow it someday. It’s a short, fast read with some great slice-of-life explorations of Latin@ teenagers. The stories fall at varying places on the spectrum of “great” to “boring,” but the great stories make There’s a Name For This Feeling: Stories worth checking out.

One Reply to “Review: There’s a Name For This Feeling”