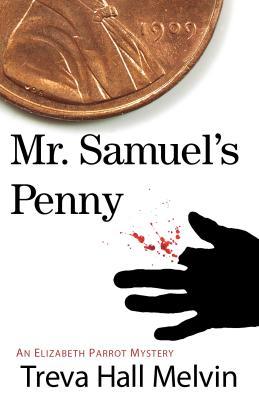 Summary: It’s 1972 and fourteen-year-old New Yorker Elizabeth Landers is sent to the sleepy town of Ahoskie, North Carolina to spend the summer with relatives. Her expectation of boredom is quickly dispelled when police sirens and flashing lights draw her to a horrible scene at the Danbury Bridge. Mr. Samuel, owner of Samuel’s Lumber Yard, has driven his car off the bridge and into the river, drowning himself and his daughter. The medical examiner thinks it’s an accident, but the Sheriff finds fresh bullet holes on the bridge right where the skid marks are. Curiously, Mr. Samuel died clutching a unique 1909 wheat penny—a penny that is then stolen from the Sheriff’s office. Lizbeth witnesses Miss Violet’s grief upon learning that her husband and child are dead, and decides she will help by finding the penny.

Her search involves Lizbeth in the lives of many Ahoskie residents. Like the owner of the grocery store, mean old Mr. Jake, who—as all the kids in Ahoskie know—hates black folks. Plenty of pennies in his till. Then there is Ms. Melanie Neely, otherwise known as “Ms. McMeanie,” who thinks the lumber yard should belong to her. And Mr. Samuel’s handsome brother Ben, who struggles to keep the business afloat after his more clever brother’s death. Lizbeth searches through the collection plates at church and in the coin jars of crazy old Aunt Ode, a strange old woman missing one eye and most of her teeth, who keeps a flask in her apron pocket and a secret in her soul.

Review: Whether or not you’re going to enjoy Mr. Samuel’s Penny is largely dependent upon on your preferred ratio of mystery to character development and exploration. I’m happy to say that Treva Hall Melvin does an excellent job of centering the reader in Ahoskie and the summer of 1972. Lizbeth’s adventures and the people she meets while living with her aunt and uncle are definitely some of the book’s greatest strengths.

Lizbeth is a solid protagonist, and her narration is charming. Hall Melvin has a way of describing people, places, and events in such a way that grabbed my attention and stuck in my memory, like the first glimpse of Aunt Ode, Mr. Jake’s grocery store, or the scene where Miss Violet breaks down over her husband’s and daughter’s deaths. These descriptions are vivid and work together to bring the characters in this book to life. Lizbeth’s Ahoskie feels lived in and like its residents existed long before Lizbeth’s visit and will continue on with their lives after she heads back home.

Of the many standout characters in the book, I was particularly fond of Aunt Alice, Mr. Jake, and Miss Violet. After Lizbeth, Aunt Alice was probably my favorite character, especially as she helped Lizbeth understand that everyone had a story behind the who they appeared to be. She is a solid, safe presence in Lizbeth’s life, and her compassion as she deals with Miss Violet is particularly touching. Mr. Jake was a character I didn’t expect to like, but the more Lizbeth found out about him, the more I (and she) liked him. I wish Miss Violet had been featured more in the story, if only because I truly loved the few interactions she had with Lizbeth.

While the characters are an asset to this book, the mystery was a bit of a letdown for me. Lizbeth’s investigations throughout the story essentially boiled down to two tactics: run across some motivation for X person to have wanted to kill Mr. Samuel and then search around them for the distinctive penny. I was hoping for a more convoluted investigation, but the moment Lizbeth found the penny, she found the murderer. The murder often took secondary importance in my mind

Recommendation: Get it soon if you are looking for an easy, comfortable read with a charming and observant protagonist who makes the most out of a 1972 small-town summer. The murder mystery takes a back seat to character exploration, so if you prefer a more thriller-esque or complicated flavor to your mysteries, Mr. Samuel’s Penny is a book you’ll probably be happier borrowing from the library.