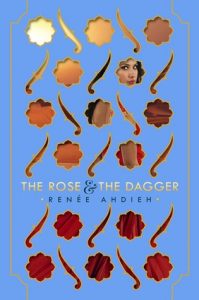 Summary: I am surrounded on all sides by a desert. A guest, in a prison of sand and sun. My family is here. And I do not know whom I can trust.

Review: I’m not entirely sure how I feel about the sequel to Ahdieh’s amazing debut, The Wrath & the Dawn. I feel in love with that novel, inhaling her words, getting lost in the world building and the characters, specifically Shahrzad and Khalid. I loved their individual character arcs in the story and their arc as a couple. When I finished the first book, I was so ready to continue with Shahrzad’s & Khalid’s story that I had high expectations for The Rose & The Dagger. However, I feel a bit let down by it and I’m not entirely too sure why.

To me, the novel started out really slow. It begins just days after the ending of Wrath & the Dawn, with Shahrzad in the Badawi camp with Tariq and Rahim after fleeing the castle in Rey. Along the way, the trio picked up Shahrzad’s father who is in a coma-like state after using such intense magic. She meets Omar al-Sadiq, the Sheikh of the Badawi people and reunites with her Uncle Reza, who is both relieved to see her and upset at her survival at the same time.  I felt like the urgency of the situation was misplaced, focusing instead on Tariq & Shahrzad’s relationship instead of the tension that should come as Tariq prepares for war. Thankfully, this lack of tension doesn’t last long and the story really starts to move when Shahrzad figures out how to make the carpet fly and begins to put her plan into motion. However, some of the plan seems to be too easy, but I knew that it would fall apart at some point as I was only halfway through the book, and fall apart her plan did, but not in the way that one would expect, which I enjoyed. I like being surprised in a novel and there were some surprises in the sequel that I I liked and some that broke my heart.

Ahdieh introduces new characters in the sequel, such as Shahrzad’s sister Irsa, and we get to know characters that we were only briefly introduced to in the first novel. She expands on the magic that seemed to be only hinted at in Wrath & the Dawn. And I think this is where my “meh” feelings toward the novel stem from. Shahrzad learns a bit more about her magical abilities, but I feel Ahdieh could have spent more time exploring Shahrzad’s lessons with new magical character Artan, but the development of her magical talents appears off screen. I would have loved how the development of Shahrzad’s magic would have helped shaped who she is and added more depth to her character growth. Instead, there is no real payoff to the magical element in the story and after one point Shahrzad never mentions her magic again; it doesn’t even register as part of her identity.

At I think that is what is at the crux with my ambivalence to the novel.  I feel like the novel wrapped up to quickly and that plot points that seemed interesting really went no where. I feel like there was so much more to explore with the world that Ahdieh created and that this series really could have been a trilogy, or maybe even more (though I did learn there are 3 novellas, so there is that). I really wanted more out of this novel, and I was left wanting. Hopefully Ahdieh will return to Shahrzad’s world sometime in the future.

Recommendation: If you are dying to know what happens with Shahrzad and Khalid, then buy it now. If you are willing to wait a bit, then get it soon.