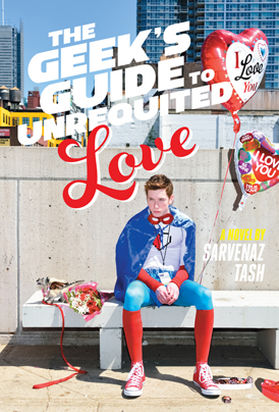 Summary: John Hughes meets Comic Con in this hilarious, unabashedly romantic coming-of-age story about a teenager trying to get his best friend to fall in love with him.

Review: I truly appreciated the laughs and smiles Sarvenaz Tash provided me through this book. I’ve never been to a Comic Con, but have been to multiple Anime conventions with my youngest child. Panels, costume contests, Artist Alley, standing in lines and many other things reminded me of our experiences although we never ventured into speed dating. Clearly, other readers would appreciate the Comic Con setting more than this 40 something mom, but even if I missed some of the references, the book was a ton of fun. Graham and his friends are seriously geeky and they revel in it. This book is a complete celebration of geekiness.

The author did a great job with the setting. The characters are moving through a vivid place. I had to laugh when Graham walks toward a hot dog stand and “almost get my eyes gouged out by a selfie stick being flailed around by a guy running after an almost-seven-foot-tall Darth Vader, shouting ‘Lord Vader!'” There are many interactions with unique individuals and most of the interchanges are amusing. One in particular was hilarious and involves lines from The Princess Bride. No spoilers here, but rest assured, there are plenty of humorous references to comics, Star Wars, Harry Potter, The Princess Bride, The Lord of the Rings, Dr. Who, Zelda, Sherlock and the like.

With such an environment, Graham’s plan seems foolproof. Their friendship began with shared readings of Harry Potter and graduated to creating comics together. The NY Comic Con is packed with so many of their shared obsessions and memories. What could possibly go wrong? Of course, many funny and not so funny things happen to throw off Graham’s plans and deal him some crushing blows. Through it all, Graham has supportive friends both new and old. This set of geeky friends are diverse and distinctly themselves. They’re charming more often than not and make this a wonderful book for a light summer read.

Recommendation: Buy it now if you’re even the slightest bit geeky and want a fun book for summer relaxation.