Everyone, please welcome Cindy Pon to Rich in Color! Cindy’s latest book, RUSE, came out earlier this month, and we’re so excited to be able to talk to her about it. Take a look!

We loved reading and discussing WANT back in 2017, so we’re all excited to get our hands on the sequel, RUSE. Can you give us a quick refresh on the rest of RUSE’s main characters and their estrangement from Jason, the narrator of WANT?

Thank you! And of course. At the end of WANT, Jason Zhou has chosen to be with Daiyu and a rift develops between he and his friends, mainly due to grief. But you’ll see for other reasons as well in RUSE.

Lingyi was one of our favorite characters in WANT. What can you tell us about her relationships with Iris and Jany in RUSE?

I love Lingyi too! She narrates part of the book, and struggles also with the aftermath of Jin Corp’s bombing. Iris is there for her, but there is a tension between the two as Lingyi wants to avenge her childhood friend Jany’s death, and Iris is terrified something terrible will happen again in their attempt to fight Jin. Is taking him down even possible? Or worth the risk?

WANT touched upon a number of current issues, particularly the issue of pollution and protecting the environment. What issues and themes did you focus on in RUSE?

I think the second books in my duologies are always dealing with the effects of what happened in the first book. So the group struggles with grief and loss and also asking the very important question of how much more do we choose to fight? I want the take away for the reader to be that we can fight in our very individual ways, maybe not as big as these characters, but every act of resistance counts. My way of resisting is through my storytelling.

What research did you do for RUSE? In our last interview with you when WANT launched, you mentioned being in Shanghai for a research trip. Are there any modern-day Shanghai locations readers will recognize in RUSE? What drew you to Shanghai?

Yes! I had the pleasure of taking a week long trip to Shanghai. I took many photos and many glimpses of that city (including a cat!) made its way into the novel. Of interest is that Jin Tower is actually based on Shanghai Tower, which had only recently opened when we visited in 2017. I had originally seen a documentary on Shanghai Tower a few years back, and remember specifically that they needed to use special cranes to lift the very huge air filters into the building. A seed was planted then!

The cover of RUSE (and WANT) are just incredible. Can you lift the curtain a little on how this cover came to be? And who is the cover artist?

Thank you! I feel so lucky to have these covers! The art is by Jason Chan, who is an incredible artist also kind enough to do commission work for the postcard and magnets I give away as swag. It all started with my first editor who acquired WANT, Michael Strother. He mentioned on twitter that WANT might need a cute Asian boy on its cover. A couple months later, I was able to see Jason Chan’s first iteration of the cover art. It is not very different than what you see on the novel now. I was blown away!! My wonderful editor Jennifer Ung was the one who suggested Lingyi for the second cover, and I felt it was perfect, as some of RUSE is told from her point of view!

Thanks so much for stopping by. Before you leave, what are some Asian YA titles launching in 2019 that you’re excited for?

Somewhere Only We Know by Maurene Goo, Eclipse the Skies (sequel to Ignite the Stars) by Maura Milan, Rogue Heart by Axie Oh, Wicked Fox by Kat Cho, and in 2020 Star Daughter by Shveta Thakrar, and Malinda Lo’s Last Night at the Telegraph Club. 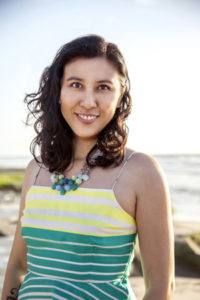 Cindy Pon is the author of Silver Phoenix (Greenwillow), which was named one of the Top Ten Fantasy and Science Fiction Books for Youth by ALA Booklist and one of 2009’s best Fantasy, Science Fiction, and Horror by VOYA; Serpentine and Sacrifice (Month9Books), which were both Junior Library Guild selections and received starred reviews from School Library Journal and Kirkus Reviews, respectively; Want (Simon Pulse), which is a Freeman Book Award Honorable Mention; and Ruse (Simon Pulse). She is the cofounder of Diversity in YA with Malinda Lo and on the advisory board of We Need More Diverse Books. Cindy is also a Chinese brush-painting student. Learn more about her books and art at CindyPon.com. (Bio via Simon & Schuster)