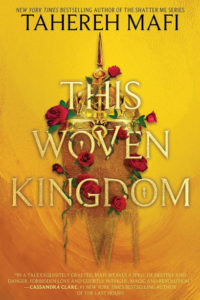 To all the world, Alizeh is a disposable servant, not the long-lost heir to an ancient Jinn kingdom forced to hide in plain sight.

The crown prince, Kamran, has heard the prophecies foretelling the death of his king. But he could never have imagined that the servant girl with the strange eyes, the girl he can’t put out of his mind, would one day soon uproot his kingdom—and the world.

Perfect for fans of Leigh Bardugo, Tomi Adeyemi, and Sabaa Tahir, this is the explosive first book in a new fantasy trilogy from the New York Times bestselling and National Book Award-nominated author Tahereh Mafi.

THIS WOVEN KINGDOM is inspired by Persian mythology, specifically the Shahnameh, and consequently author Tahereh Mafi has done a lot of rich world building. I was particularly fascinated by the uneasy peace between the human and the Jinn remnants and what repercussions that had in day-to-day life for Alizeh. The pace of the majority book was well-suited to world building and especially character exploration, though it meant the pacing in the final act took me by surprise, enough so that I needed to reread to ensure I understood everything that had happened.

Our two protagonists, Alizeh and Kamran, are interesting and complicated characters. They are both good foils to each other, and I enjoyed experiencing how they each saw the world as people who were raised to be rulers someday. Because the book is so sharply focused on them, there is very little development for any of the secondary characters. Consequently, whether or not you like them as characters and as a pairing will heavily influence how much you enjoy the book as a whole. (Kamran is, unfortunately, prone to being dismissive of any woman who isn’t Alizeh, and since Alizeh is the only woman with significant narrative weight in the story, I was irritated regularly with him.) I generally enjoyed how their forbidden romance (and banter!) played out across this book, but I very much hope we get further development of the secondary characters later in the trilogy, hopefully as POVs.

Overall, I’m interested in seeing where this trilogy will go and whether Alizeh and Kamran’s relationship will survive the journey. The ending of this first book has provided a nice setup for the series to show us what is happening in the wider world of THIS WOVEN KINGDOM. There is a lot of promise here, and I hope that the rest of the series will deliver on it in in the future.

Recommendation: Get it soon if you enjoy forbidden romance tropes. THIS WOVEN KINGDOM is heavily focused on the romantic leads, so while there is some great world building, the scope of this initial book is rather narrow. There’s plenty of opportunities for glimpses of the wider world in the remainder of the trilogy, however, and I’m looking forward to seeing how it all plays out.